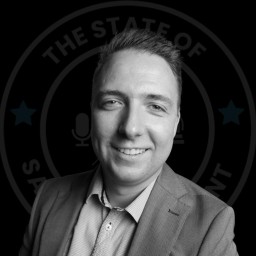 Originally from Germany, Ian Curd was raised in Australia, and worked in media for nearly 13 years. Around 2009, he stepped into the space that is now known as Adtech, MarTech and enterprise tech sales. He has also worked for many American businesses, but has been acting as an international intermediary for companies all over the globe. Most recently, Ian has been working in Europe for one of the pioneers of data management platforms making him a great resource to align enterprise tech sales and marketing teams.

Ian was a commercial director in Australia and New Zealand during the period where DMPs (Data Management Platforms) were maturing and becoming a huge conversation piece in the industry. In September of 2020, Ian became the Commercial Director of Octopeek, an organisation that combines advanced DMP, consultation, and AI (Artificial Intelligence).

Octopeek is a year-old consulting business in big data infrastructure and machine learning applications. Essentially, there are three main services:

As Ian’s expertise grew in demand, new needs (or gaps) in the system cropped up.

It's always a challenge working with brand new businesses, and even more so when they come from the outside. In the beginning, you often have the constraint of very minimal resources. However, what they lack in resources, they made up for with a strong, collaborative team.

An example is his previous work at the American DMP Lotame. With teams and offices in the US, Sydney, and Singapore, they found themselves facing the same challenges. Guides, techniques, and technology were all quite new to the market at that point, so they began to boil down the history and methodology, and began explaining the application to the Australian market.

Most of the early material was based on trying to get publishers and brands to see the value of their products and services, but in order to succeed, Ian relied on collaboration.

He believes it’s absolutely necessary to have solid collaborative processes with all other parts of the company to align enterprise tech sales and marketing.

Educating and engaging the public was step number one. There was a lot of confusion about DMP in the market, and even when the acronym itself became really popular, a lot of services that started calling themselves DMPs weren't actually DMPs.

Why? Because any ad tech platform collects data- so businesses promoted themselves as “data management platforms”, even though they didn’t have the systems, services, or experience to make those claims.

As the education succeeded, there were only a small handful of strong players that were operating in the space, which led Lotame to the next stage: differentiation.

That's what separates their services from Adobe's DMP, and all other companies in the business: collaborating with their clients, and developing a process of customisation.

How did the team manage to accomplish this with limited resources? They started with an overview, taken from a general area (country/culture specific- you can find more on cultural considerations further on), maybe American markets, maybe Australian or European.

Once that is given as a basis, they work with the client to make that fit the local requirements and local knowledge levels.

This was not an easy task, as there was no prehistory for that kind of technology in the market, but found a pattern while focusing on each individual client.

Each client simply needed vendors that would act as guides to introduce new technology into their organisation.

Ian and his team focused on getting to the practicalities of the situation quickly- boiling down some of the over-the-top marketing language into what tools they considered to be useful for their environment.

Ian recalls a professional, first-time meeting with an American visitor, who had come over to present to an ad agency in Sydney. He found the presentation theatrical, and the reaction from the room of Australians was virtually the same: they considered themselves a little bit more down to earth and dry in approach,  and expected to receive the same tone. It’s not about what’s good or bad, or what’s right or wrong, it’s just part of the reality of living and working in a diverse world.

These are the nuances of working internationally to align sales and marketing.

While practicality and simplicity are still key, it’s important to keep in mind that every client is different, especially when they’re coming from a perspective different than your own.

For example, American business culture brings a lot of energy and immediacy to handling problems, understanding context, and developing solutions. There's almost an enabling culture that goes on with the American business and enterprise tech sales.

In Europe, younger French businesses are adopting a so-called American approach for marketing and business, which was previously considered a no-no.

Because Ian spent most of his life in Australia, he was accustomed to very advanced markets. For example, in Australia,  the digital ad spend outperforms much larger markets in a lot of ways, and even going back in time, it was very advanced in terms of digital infrastructure, user adoption of mobile, even though in the early days some of the technology wasn't quite keeping pace with the user.

In addition, Australia has a very pragmatic culture: an ethos of always giving it a go.

These are the things that make Australia interesting and exciting to outside businesses.

Now, these things can also make it a challenge for businesses coming from the outside in Australia, because volume can only go to a certain level. Most of these platforms rely on volume to make money, and even though that standard's very large in Australia, it's concentrated in a limited group of heads, buyers, and brands.

Next to that, the cost of doing business in Australia is relatively quite high. When looking at the big picture, then, Australia is very attractive, but there are challenges for companies who want in.

In Europe, there are a lot of variants. First, there’s a diversity of opportunity, especially when it comes to mobilisation and access to multiple capitals.

However, because of the huge amount of opportunity, there is more competition and complexity- markets within markets.

In Germany, the market is quite complex. There are a lot of advanced companies creating their own tech independently, and it's a conservative business culture. Fast-forward startups that are looking to jump in and explode are usually unpopular. To establish yourself, you have to show stability and consistency.

When it comes to France, it’s important to know that Paris has always been the centre of business, and probably always will be. This has changed a little bit over the last couple of years, with centres like Bordeaux and Toulouse, which are developing their own centres of startup growth.

Still, the decision-making often takes place in Paris, and is quite intimidating for those from the  outside. They’re considered to be quite a closed business culture to outsiders.

In order to succeed, you have to take the time to develop those relationships with key people.

Next, Ian tackled the danger that comes from the separation of marketing and sales. This translates into separation between the market and the climate, because marketing will sometimes determine the strategy. This strategy, isolated from the rest of the data, handed down to sales causes dissonance, miscommunication, and missed opportunities.

A company is a living, breathing thing, and it’s strategy must evolve. This evolution can only be successful when there is quality feedback, communication, and unity to align sales and marketing.

Again, collaboration: working together, and understanding what you’re collectively doing together for the client/business.

For Krueger listeners and readers, you can connect with Ian and his team through LinkedIn, or check out Octopeek for a data consultation.

Please log in again. The login page will open in a new tab. After logging in you can close it and return to this page.